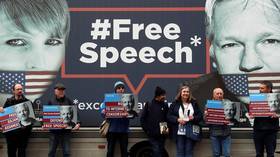 The Democrat-majority House Foreign Affairs Committee went after an RT America reporter and described WikiLeaks publisher Julian Assange as a “criminal who weaponized stolen information.” Twitter was not amused.

Assange was arrested in London on Thursday, on a US warrant related to WikiLeaks’ publication of classified US documents in 2010 – and, at least so far, not in relation to the 2016 publication of Democratic National Committee documents or private emails from Hillary Clinton’s campaign chair. That has not stopped some US politicians from reviving the recently debunked specter of Russiagate, including House Foreign Affairs chair Eliot Engel (D-New York).

After being criticized for this by RT America correspondent Dan Cohen, the committee majority tweeted from their official account that the First Amendment of the US Constitution “protects free expression, even for Russian propaganda outlets like the one you work for. It doesn’t protect criminals who weaponize stolen information.”

The ratio on the tweet was something to behold, with replies outnumbering likes and retweets 3:1. The overwhelming number of responses were negative, ranging from calling out the tweet’s incorrect claim about Assange and WikiLeaks, to the defense of RT and suggestions that maybe the HFAC staff need to re-read the Constitution.

“RT is far less propaganda than US/UK [mainstream media] and is hands-down more honest, objective, truth-speaking, and presenting of multiple viewpoints and their critics than any US/UK MSM. Maybe that’s why hosts/producers keep leaving US/UK MSM to work at RT instead,” said one Twitter user.

“Whoever wrote this for HFAC should think about reading a book on constitutional law for the first time,” wrote another.

“I get better and more useful news from RT than from any US corporate media outlet,” another added, asking why a House committee was “tweeting out smears at journalists anyway” instead of “doing something useful.”