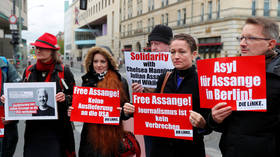 The US attempt to prosecute WikiLeaks founder Julian Assange is a spiteful assault on civil freedoms conducted by an ailing superpower that is struggling to preserve its dominance, UK-based journalist John Pilger told RT.

One should not mistake what is happening to Assange for anything but the persecution of a man, who embarrassed the US by exposing to the public Washington’s brutality in the Middle East, award-winning British journalist John Pilger told RT’s Going Underground program.

“The United States has aroused the ire because what we are in the midst of is the world’s greatest superpower struggling to maintain its dominance. Its information dominance, its technological dominance, its cultural dominance. And WikiLeaks has presented an extreme hurdle to this,” he argued.

If we lose the Assanges – and there aren’t many of them, a handful maybe and certainly no one like him – if we lose the WikiLeaks, then we lose a whole stratum of freedom. We stop questioning.

Assange was arrested by the British authorities on Thursday after Ecuador revoked his political asylum and allowed the police to drag him out of the embassy in London. The US accuses the publisher of conspiring with WikiLeaks source Chelsea Manning in her leaking of classified materials related to US military presence in Iraq and Afghanistan.

WikiLeaks publications based on the Manning leak, especially the so-called “collateral murder” video, dealt a massive blow to US attempts to cover up the “homicidal nature of its colonial wars,” Pilger said.

“Anybody watching that video really has to read very little else of the WikiLeaks revelations about the nature of the American wars, because there it is. There is some kind of consensual belief – I’m trying to figure for a polite term for ‘brainwashing,’ frankly – that we don’t do these kinds of things, we perpetually benign,” he explained.

On ‘our’ side, these things simply do not happen… They are only done by totalitarian states, the rogue states. In fact clearly the biggest rogue state of all is the United States.

Pilger says the attack on WikiLeaks is emblematic for the current state or journalism in the West, which has betrayed its mandate to be the public’s watchdog for the actions of their governments.

The journalist said Assange was arrested “on a political whim” and his likely prosecution and imprisonment in the US “opens up a whole chapter of diminishing the very principles that came out of the Second World War, upon which the Universal Declaration of Human Rights is base. It shows how fragile they are.”

‘Lop her head off!’ CNN’s April Ryan gets revolutionary with Trump’s...