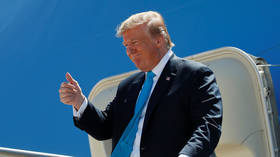 US President Donald Trump, who said he loved WikiLeaks during his election campaign, tried to distance himself from the arrest of Julian Assange, which was carried out by Britain on the request of the US.

Speaking to journalists in the Oval Office on Thursday, hours after the arrest of Assange in London, Trump said:

I know nothing about WikiLeaks. It’s not my thing.

Trump was far less reluctant to speak about the transparency site in 2016, when it played a major role in the US presidential election after it published a number of documents leaked from the Hillary Clinton campaign.

Then-candidate Trump called the work of the site “amazing” and said he “loved” what it was being doing.

Ironically, those statements were used against Trump by proponents of the now-debunked Russiagate conspiracy theory, which said his campaign colluded with the Russian government to steal the election. Russia was accused of hacking into DNC computer networks and releasing stolen documents via WikiLeaks – an allegation that both Moscow and the website deny.

Trump officials at one point were accused by the US media of having foreknowledge of the contents of one of the batches of documents published by WikiLeaks. The story soon flopped after it turned out that several outlets, which claimed to be reporting separately, based their reporting on a mis-read date of a tweet, which was actually sent by a random person to the Trump campaign to draw attention to a fresh release of leaked materials.

WikiLeaks founder Assange was arrested by the British authorities after his political asylum was stripped by Ecuador and his citizenship suspended. Police officers were allowed to enter the embassy and drag Assange out, ending his almost seven-year stay at the diplomatic mission.

The US wants Assange to be extradited and tried for allegedly conspiring with WikiLeaks source Chelsie Manning in her leak of classified military documents a decade ago. The US indictment dates back to 2017, showing that instead of secretly trying to shield WikiLeaks from US investigations into Trump-Russia allegations, which was the common wisdom of any Russiagaters, the White House was secretly trying to get Assange in its custody.