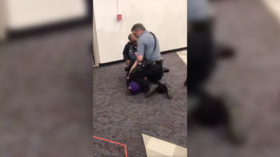 A protestor was arrested Thursday night for spraying conservative political commentator Michael Knowles with an unknown substance at an event at the University of Missouri, Kansas City.

The firebrand Fox news contributor and Daily Wire host, whom Vanity Fair described as “a dapper, lib-triggering troll,” was invited to the university by Young Americans for Freedom to host an event called ‘A night with Michael Knowles’ during which he was scheduled to give a talk titled, ‘Men are not women.’

The protester rushed the stage with a water pistol filled with what was initially believed to be bleach. He was tackled and detained by campus security while fellow protesters chanted “hands up, don’t shoot!”

“The protest turned disruptive and after several warnings, the disruption persisted, and one protester was arrested,” UMKC officials said in an emailed statement.

Protesters gathered outside the event carrying signs which read “Trans rights are human rights,” “Respect my existence,” and “Trans men are men.”

Kansas city police assisted University police with the arrest and crowd control after the incident.

The apparent assault is one of manysuchincidents at predominantly conservative university events over the past few years, especially since Donald Trump took office in the White House. Many conservatives were vocal in their support of Knowles online.

BuzzFeed looks for Mueller report ‘hoaxes & spin,’ gets served with...

With Mueller done, is it time to investigate the FBI? (DEBATE)

The plot to overthrow Venezuelan govt for oil & ICE ‘mass...