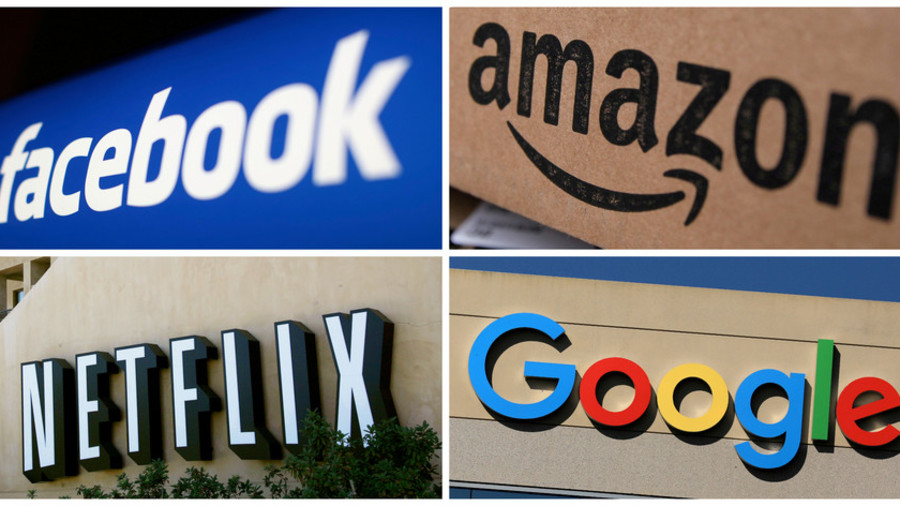 Wall Street opened sharply lower on Friday, weighed down by a dramatic fall in stock prices of American technology companies. The US markets have now entered correction territory, down over 10 percent from September highs.

The tech-heavy Nasdaq index plunged over 3 percent in early trading. Dow Jones was lower by 2 percent at over 500 points, while the S&P 500 sank more than 2.5 percent.

Shares in Amazon plunged 8 percent, while Alphabet fell 2.7 percent. Facebook, Netflix, and Apple were all losing more than 1.5 percent.

“When the stocks that are carrying the markets begin to crack, investors are going take cover. Investors are waiting for more visibility for things to see where the rotation takes them,” said Andre Bakhos, managing director at New Vines Capital LLC in Bernardsville, New Jersey, as quoted by Reuters.

Amazon’s revenue from international business, which accounts for 27.5 percent of total sales, was hit the hardest, with growth falling by half to 13.4 percent compared to the previous quarter.

“We don’t see any real structural issue with Amazon but nearly every line in the business is decelerating a tad, and we typically see another deceleration in retail in 4Q, hence are struggling to identify a catalyst,” Barclays analyst Ross Sandler said, as quoted by Reuters.

The US economy slowed down less than analysts had expected. It grew at a 3.5 percent annualized rate in the third quarter of the year. A trade war has caused a drop in soybean exports, but it was partly offset by the strongest consumer spending in nearly four years.

“This is seen as a slight positive. There’s less pressure on the Federal Reserve to do something [on interest rates],” Bakhos said.

Friday’s selloff comes after US indices rallied in the previous session, but are still down this week. The S&P 500 and Dow dipped 2.2 percent and 1.8 percent this week, respectively, entering Friday’s session. The October stock plunge has erased all gains seen in US markets this year.